Running Down a Dream

This afternoon I came home from lawyer work and got dressed to head to Get Yogafied to play. I put on: 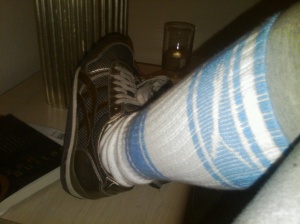 The photo below was from Halloween 2002. My first in Miami. Notice: socks. The sweet Tiger kicks in the photo above were procured the following summer in NYC. My feet have had an ongoing love affair with them for the seven years since.

After yoga Friday night, life found me in my lifelong friends’ kid brother’s pad in Denton, with his laid back liberal arts school posse, discussing ways for Get Yogafied to take it to their streets. There I found young aspiring advertisers, musicians, diplomats and many other people that probably aspire to do lots of other things too. Like pretty much everyone I’ve spoken with about Get Yogafied + Get Charitable, they were super gracious and willing to help out and share ideas. After we were done talking shop, I considered taking off to head home and work on web content, but having just written some lyrics about going with the flow, instead accepted the offer to stay, watch Step Brother on XBOX 360, and have a veggie on multi-grain delivered from Jimmy Johns.

After Step Brother, we spent the better part of an hour watching iPhone filmed home movies on the big screen of beer pong, snow boarding, sleeping, skateboard trick attempts in hotel rooms, driving, ski lifting, more beer pong, and more beer pong from their recent trip to Colorado. Somewhere amidst the 30 second beer pong videos I found myself mind-lifted to the decade past. My early twenties. The roaring 2000s. Peace out Clinton and Grunge, what’s up Bush and “Cutting Yourself Is Cool” music.

In Michael Brown’s book “The Presence Process” he refers to an adult as a “dead child”. He says that by growing up into our adult lives, to function and fit in, we begin more and more to “live in time” (in the past and future, as opposed to in the present moment). It begs the question: once you start working and your adult life, how much of your time do you really spend in the present moment? How often are we really just experiencing what’s in front of us, and not either doing, thinking, planning, worrying, anticipating, reflecting back, trying to remember, panicking, blaming or praising. Several months ago I was driving down Central Expressway, just like I had a thousand times before, after dinner at a friend’s house. On this particular night, for no apparent reason, I looked up at the street light on the side of the freeway. Then I looked at the next light, and the next, and the next. The thought struck me – I’ve NEVER, in 15 years of driving this road, noticed that the lights make a flowing wave like pattern for miles. I wonder. How much else do we miss. What’s beneath the surface? We use what percent of our brain? Why’s it so hard to imagine that there’s more stuff going on than meets the eye? Imagine if you really experienced everything (or even just the bulk of things) that is in front of you in any given moment.

There’s a theory about autism that says that people with autism have “enhanced perceptual function”, which could account for some people’s ability to do things like count toothpicks, and would explain why they are extremely sensitive to perceptual stimuli (lights, sounds, etc.). There have also been studies that have concluded that people’s brains with autism develop more rapidly than the average person’s shortly after birth, and then slow during childhood. Again, who really knows what’s going on in there anyways. We use what percent of our brain?!

As much as mainstream society has, in recent history, said that we are all separate entities from one another, a growing movement is sweeping the globe that’s embracing a return to thinking otherwise. When you start contemplating the interconnectedness of the universe and everything and everyone in it, little things no longer seem like coincidence. You pick up the phone to give someone a shout, and before you dial – the phone rings. It’s them. You think about how you really want to hear a song, and it comes on the radio. One of my more serious break-ups involved having to wait three days to tell the person that I wanted to break up with them. They had important things going on that I didn’t want to disrupt. So I waited. While I waited, it rained ALL weekend. After finally getting it out there and telling him what I had to say, I grabbed my toothbrush and dog and headed off to crash at a friend’s.

I woke up the next morning and hit the road to go find somewhere new to live. I walked outside to the sunshiniest day ever, not a cloud in the sky. Reflecting on my good fortune, I hopped in the car, opened the sun roof and turned on some tunes. For whatever reason, I found myself listening to FM radio that day. I don’t recall what was playing when I hit the power button, but I immediately changed it. The first press of the first pre-set button landed me on literally like the first bar of Fleetwood Mac’s “Go Your Own Way”, directly followed by Tesla’s “Love Song”, which is arguably the most chipper break-up song ever written. I’ll spare you the lyrical analysis. The third song was actually also a break-up song, but which one presently escapes me.

We’re raised to believe that the world doesn’t revolve around us, although we’re quite confident of it at birth. The world can’t revolve around us, because there’s only one world, and lots of us, right? This represents a belief that reality is the same for everybody and that we aren’t intimately involved in the making of it. If, however, we can wrap our minds around the idea that a butterfly flapping its wings can cause an earthquake, why’s it so hard to imagine that a being as awesome and powerful as a human couldn’t cause a little rain, or that a song on the radio isn’t being played for us?

The idea that reality is subjective isn’t new, nor all that difficult to wrap your mind around. The world you see isn’t the world, it is your reaction to it. How can we know this? Well, how do we experience the world? Through our senses. We see, hear, smell, touch and taste (if we’re lucky). From there, we use our brain, and most everything becomes interpretation. No two people experience exactly the same reality, because everything goes through the filter of brain interpretation. If the world truly is your oyster, why not shuck it and put your effort into enjoying every single moment.

So back to school. There’s definitely something comforting about knowing that college kids today are still doing the same things they were in the past decade, and every decade since the inception of Led Zeppelin. Living. Loving. Learning. One of my yoga teacher friends talked recently about a study that showed that people who lifted weights received similar benefits to those who simply thought about lifting weights. I guess the point is, that like these students, who are taking the time now to put together the building blocks of their future, while spending the bulk of their time living in the “here and now”, we need not always try so damn hard to get to where we think we need to go. Just like you’ll ultimately get your degree if you wait long enough, so too will you ultimately get to where ever you need to go, whether you try and force your square peg into life’s round hole or not. 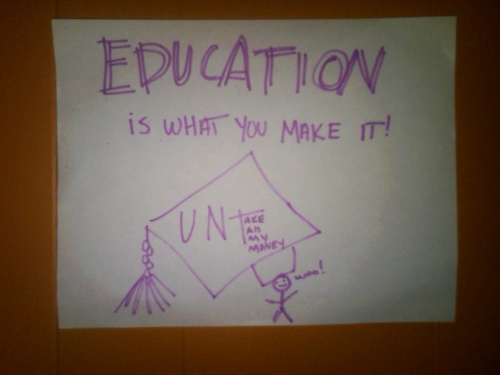 Wishing you an eye-opening day full of wonder. =)

This entry was posted in Uncategorized. Bookmark the permalink.