The Skinny on Good

Thursday I had my weekly yoga for singing/songwriting lesson swap with Lisa Linehan. She posted about it afterwards in a blog called “So Many Good Things”. I know exactly how she feels. Because it’s exactly how I feel. There have just been SO MANY GOOD THINGS lately. And quite frankly, it’s starting to freak my ass out just a little bit.

OMG. I FINALLY figured out how to make links happen on here. Another good thing! So what’s so bad about good anyways? Isn’t good good? Sure. But here’s the rub: The soul train doesn’t ditch its schedule and stay in the station, just cause you’re ready to party. The need for personal work and growth continues, regardless of how good you feel right now. We have this tendency when things go wrong to get serious, buckle down, and really work on things to improve our plight. Nobody wants to suffer. But, what happens when we think we’ve gotten what we want? Party time. Excellent. Then what? We wake up one day to find we’ve no longer got what we want anymore.

I’ve been a weight yo-yoer almost my entire life. Weight control issues and obesity run deep on both sides of my family. I was told by my Grandmother at a very young age that I’d never be able to eat what I wanted, would always have to watch it, or that I’d be fat my whole life. I’m 5’2 1/2″, and in my adult life have weighed anywhere from 110 – 145, neither of which were healthy.  To put it in perspective for the taller ladies – that equates to  2-12 dress sizes. For the men – a 26″ to a 31″ pants size. 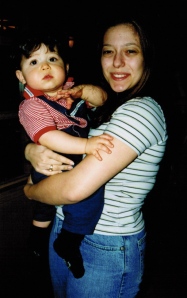 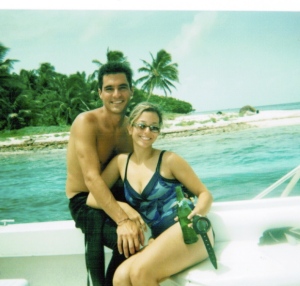 I started working out in a gym regularly at the age of 12 (not accidentally the same age that I discovered boys). I had tried sports in school (volleyball, track, basketball, soccer), but always seemed to suck at them. So began my love/hate relationship with the gym. Basically, I love being in shape, but hate working out. I’m pretty sure the gym is indifferent on the subject. The pattern that emerged, starting in high school around 1993, and lasting through the end of 2007 went as follows:

What finally broke this turbulent 15 year cycle is, in hindsight (of course), simple. It was consciousness. Presence to what I was doing. I started watching “The Biggest Loser”. I began tracking what I was doing on Weight Watchers Online. I read LOTS on food and nutrition. I joined a yoga studio and started studying yoga philosophy. One component of that philosophy is self-observation or study. So I started investigating why I ate, exercised and thought the way I did. I started listening to my body regarding what types of foods it wanted, when it wanted them, and how much it wanted.

I finally found a recipe that worked – paying attention. And my happiness level increased noticeably. Out with the days of self-torture and doubt, in with the days of deliciously enjoyable yoga practices, long walks outside and eating and drinking whatever I wanted – with presence. This simple recipe has kept me at my high school “skinny weight” since early 2009. Which is great. So what am I freaking out about now? Well, the recognition that life is always a practice, and that if we stop practicing when things get good, we’re likely to wind up back towards where we started at. Put another way: “Lack of introspection is a thief; it slinks behind when mindfulness abates. And all the merit we have gathered in it steals; and down we go to the lower realms” – Shantideva from “The Way of the Bodhisattva”

So I was stressed out in December, and sick in January. By the time I was healthy again in mid-February it seemed my whole world had withered. My career had shifted and was in a state of uncertainty and my social and dating lives had vanished. But then, just like my yoga teacher and friend Leanne Hall said would happen during class one day, my world blossomed once again, right along with the coming of Spring. The yoga studio I’m a partner of opened, old friends returned, new and amazing people arrived and I began writing and singing.

When I felt like poop I was taking uber good care of myself: eating stupid healthy, reading tons on life, spirituality and philosophy, doing lots of yoga and meditating twice daily. Now that I wake up wanting to hug life daily, I’m: eating stupid a lot, not doing lots of yoga and not meditating twice daily. The difference this time is that I don’t have to go through the pleasure of gaining 20 or 30 pounds to tune-in to the frequency. Work on balance. Ok. Got it.

Why do we have the tendency to get so carried away when we’re passionate about a new project, job, romantic interest or otherwise? Buddhist Philosophy would say it’s because our nature is to seek pleasure and avoid pain. Let’s face it, doing something you like and are good at and then being recognized for it feels amazing. So too does falling for someone new. Or landing that new dream job. Whatever the case may be. But just like the highs of these types of pleasures are really high, so too are the lows really low. Being fired is devastating. Being dumped, heartbreaking. So Buddhist wisdom says: Any pleasure that is capable of also bringing about pain can’t be a true source of happiness, with happiness being the meaning of life. Another principle in Buddhism is the practice of “non-attachment”. So they say it’s not about going without. It’s about enjoying what you have, with the recognition and appreciation that the only thing constant in life is change. It’s about living in the present.

IN SUMMATION: So instead of freaking out today, maybe I’ll just go to yoga. I’ve been wanting to check out Virginia Marum’s Balloga Class all week anyhow. =) The Dalai Lama said: “As human beings we all want to be happy and free from misery… we have learned that the key to happiness is inner peace. The greatest obstacles to inner peace are disturbing emotions such as anger, attachment, fear and suspicion, while love and compassion and a sense of universal responsibility are the sources of peace and happiness.”

PS: Dwayne and I were discussing the Live album “Secret Samadhi” yesterday (samadhi = state of bliss in yoga). Thanks to him for reacquainting me with the album (apparently I never gave it much of a shot)! Here’s a video of the track “Century”. Viva the ’90s. Enjoy. =)